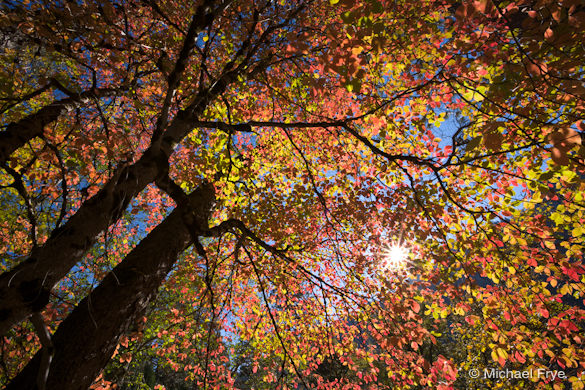 I taught a private workshop in Yosemite Valley yesterday, so that gave me a chance to check on the autumn progress. The big-leaf maples, which often provide the most vibrant fall color in the valley, are getting there; I’d say they’re about 60 percent turned. The best spots for maples right now are across the river from the junction of Highway 140 and the Big Oak Flat Road (Highway 120), and along Southside Drive underneath Middle Cathedral Rock (and directly across the valley from El Capitan).

The dogwoods are also changing, though not as quickly as the maples. We saw some nice ones near Valley View, aka Gates of the Valley (Location 5 in both the book and app versions of The Photographer’s Guide to Yosemite), including the specimen at the top of this post. But there are still a lot of green dogwood leaves, so I’d say they’re about 30 percent turned. The dogwoods at higher elevations, along Highways 41 and 120, and in the Tuolumne Grove, usually turn earlier, so they should be looking good, but I haven’t been able to check them out.

As for the two notable non-native trees in the valley, the sugar maple near the chapel is brilliant right now, while the elm in Cook’s Meadow has just barely started to turn.

Something strange has happened to the cottonwood trees. In most years cottonwoods add a nice splash of yellow along the Merced River, but this year most of the leaves just turned brown and dropped off. Some of the trees east of Yosemite Lodge seem okay, but west of the Lodge most of the cottonwoods are now bare.

A similar thing happened with some of the black oaks: the oak leaves in El Capitan Meadow and a few other places have just turned brown and fallen off. The oaks around Cook’s Meadow seem fine, though they’ve just barely started to change color.

If this were a drought year I would explain these withering leaves as a response to lack of water, but it’s been quite the opposite—one of the wettest years on record. The oaks don’t like wet feet, so maybe that explains their behavior. But cottonwoods love water, so their situation is more puzzling.

However, the maples, dogwoods, and remaining oaks look like they’ll put on a good show during the next couple of weeks. There’s already some nice color in spots, and I expect it will be even better in a week or so.