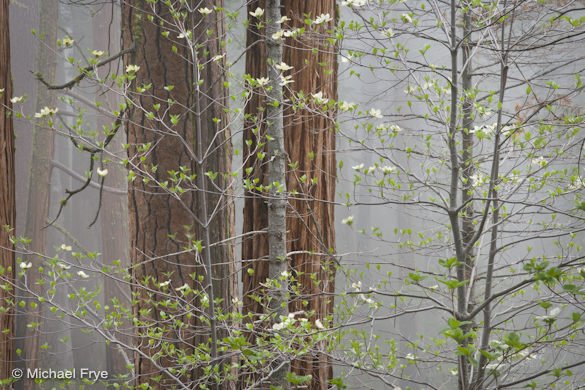 A) Dogwood, Pine and Cedar

On Wednesday morning Claudia and I woke early and headed up to Yosemite Valley. The sky was overcast, although the sun threatened to break through at times. After recording footage for a video I’m working on (more about that later), we decided to  drive up the Wawona Road to look at dogwoods. As we ascended, we drove into the clouds, and into a patch of fog clinging to an area of burned trees.

As I photographed this area, the fog thickened, and I thought a group of dogwoods lower down might have become enveloped in the mist. Sure enough, they had, which made me happy. What could be better than dogwoods in mist? I spent a couple of hours composing photographs.

Although conditions were great, this area has thick undergrowth, and many potential images were ruined by intervening branches. The best views were often from the road, but the lack of shoulders and heavy RV and bus traffic made this hazardous duty. Nevertheless I was able to find several compositions I liked.

New images are difficult to edit. It’s usually easier to recognize the winners after some time has passed. But this blog gives me an extra tool—I can ask for help! So let me know which of these photographs is your favorite. 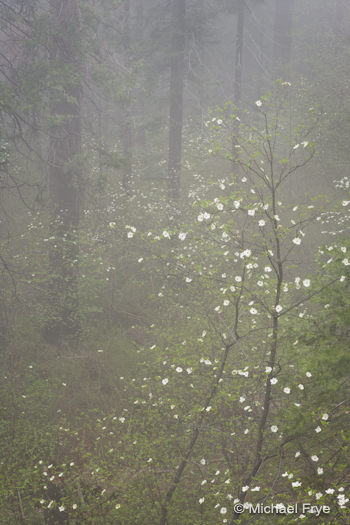 B) Misty Forest With Dogwoods 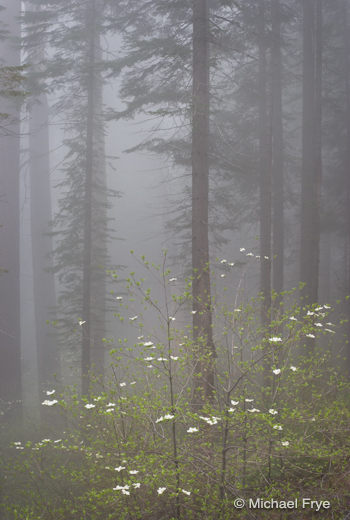