“Another Lousy Sunset” by Ken Hornbrook

The critique is finally here—thanks for your patience!

This week’s photograph was made by Ken Hornbrook at Bandon Beach along the Oregon coast. There’s some wonderful sunset color in the sky, plus blue and orange reflections in the water, creating great color contrasts throughout much of the frame. Any photographer standing at this beach that evening would be excited about the possibilities. But what do you do with that light, that color?

Ken found a great camera position to take advantage of the colorful sunset and interesting shapes of the rocks. It looks like he moved into a small cove or gap between cliffs or sea stacks. This created a nice window, with dark shapes on the sides framing the view of the stacks beyond. The curving, colorful V-shape of the water in the foreground leads our eyes smoothly from bottom to top. It even has a bit of an S-curve. I’ve pointed out problems with foregrounds in previous critiques, but I think this one really works, and adds a lot to the photograph.

The juxtaposition of dark and light areas in this image creates some beautiful designs. The overall shape of the light areas is a broad, twisting V. The large, dark areas on the left and right sides are interesting shapes in themselves, and echo each other enough to tie them together and help unify the composition. Then the shapes of those sea stacks create a varied and intriguing pattern of their own.

Ken managed to avoid a merger between the right-most sea stack and the cliff along the right edge—just barely. I might prefer to see a tad more room there, which would have meant moving the camera position slightly to the left. On the other hand, that almost-merger matches the unavoidable merger between the left-most sea stack and the adjacent cliff, so it might actually be better this way, as it emphasizes the left-right symmetry and balance.

Another issue is that the bright foreground V touches the bottom of the frame. When I first looked at this image I thought this was a mistake (albeit a minor one). It’s often problematic when bright areas merge with the edge of the frame, leading viewer’s eyes out of the image. But as I thought about it, I wasn’t so sure. As is, this V separates the dark areas on the left and right sides into distinct shapes. If Ken had included more dark sand along the bottom, those two large dark shapes on either side would merge into one big shape.

To show you what I mean, I took this image into Photoshop, extended the canvas along the bottom, and cloned in more dark sand along that edge. I did this rather quickly and crudely, so it’s best if you look at this version without focusing too closely on that area, and just look at the overall shapes of the image. This cloned version averts the problem of the light areas touching the bottom edge, but also merges those dark shapes on the left and right, and they lose some of their graphic quality because of that. 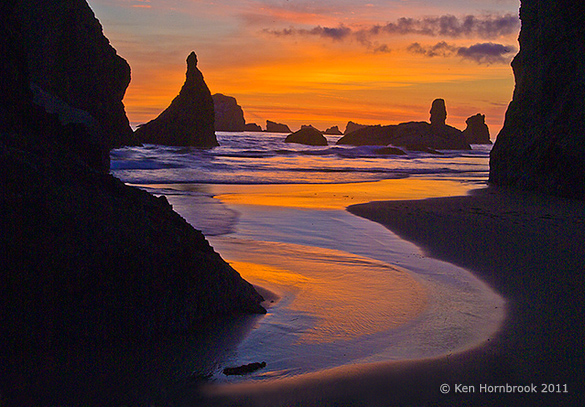 To see what it might look like, I extended the canvas in Photoshop and cloned in more dark sand along the bottom

Personally, I’m undecided about this issue. Both versions work (except that the modified version has some obvious, crude retouching). But regardless of which variation you prefer, I hope this points out the importance of paying attention to bright spots touching the edge of the frame.

I like the lens choice. A wide-angle lens would have made the sea stacks too small and distant. There’s a lot of depth in this image, so the small, f/22 aperture helped keep everything in focus. 1/4 second is one of those in-between shutter speeds—not fast enough to freeze the waves, not slow enough to really blur them. In this case the slight blurring is fine, suggesting a bit of motion, but usually it’s better to go one way or another—either make sure moving objects are sharp, or use a slow enough shutter speed to really blur them.

This was a high-contrast scene, and a difficult exposure, but I think Ken did well here too. The highlights are always the most critical area. Ken sent me the Raw file of this image, and while the red channel is slightly overexposed in parts of the sky, it’s easily recoverable. There is, surprisingly, a little detail in the shadows, and nothing is pure black.

In the image that Ken uploaded to Flickr, there’s some obvious noise in the shadows. This surprised me. I might expect to see noise in a large print, but not in a small screen image like this. I thought that the photograph might have been lightened greatly, as lightening shadows often brings out noise, but Ken told me that he didn’t do much to the image in software, and looking at the Raw file confirmed this.

With the contrast created by the Lightroom defaults (+25 Contrast, and the “Medium Contrast” point curve), the shadows looked black, and no noise was visible. But as soon as I lightened the shadows even a tiny bit, even just by zeroing out those default settings, a lot of noise appeared.

So where did the noise came from? I it was mainly the camera. Kodak no longer makes SLRs, but this model was one of the first really high-resolution digital cameras—14 megapixels. But in those days (seven years ago seems like ancient history in this fast-changing world of digital photography) manufacturers hadn’t learned to control noise nearly as well as they can today.

Not surprisingly, Ken has since moved on to a Sony Alpha 900, which I’m sure handles noise much better. But new cameras aren’t totally immune from noise problems. Generally speaking, the smaller the sensor, and the older the camera, the more noise. So newer, full-frame SLRs are usually great at handling noise, but even these models can show objectionable noise with long exposures or severely lightened shadows.

Now I’m not trying to encourage you to spend thousands of dollars on a new, full-frame SLR. If you have an older model, or a smaller sensor, you can reduce noise greatly with good technique. Mainly this means making your exposures as light as possible without blowing out highlights (my recent post about reading histograms explains how to do this).

In high-contrast scenes you can bracket exposures and blend them together later, either with HDR software like Photomatix, manually in Photoshop, or with my favorite tool, LR/Enfuse. Blending allows you to avoid lightening noisy shadows: instead of trying to pull detail out of dark areas, you can essentially blend in that detail from a different image with a lighter exposure.

With this photograph, I’d suggest that Ken simply darken the shadows and make them pure black, hiding the noise. There’s no real need to see detail in the shadows here, and the image might actually look better, with more snap and punch, if the shadows were black. Also, the photograph looks oversharpened, creating halos along the edges of the rocks, and exacerbating the noise.

This photograph has great light and color, with a nice late-day mood, and is technically well executed. But I especially like the composition, with its intriguing intersections of varying shapes. The minor issues with noise and sharpening are easily fixed.

I’d love to hear your thoughts about this photograph. What do you think about that bright area touching the bottom edge: would you like to see more dark sand along the bottom, or do you prefer it as is? And what about the noise—did you notice it initially, and if so did it bother you? Have you dealt with noise issues in your own photographs?

Thanks Ken for sharing your image! You can see more of his work on Flickr.

As part of being chosen for this week’s critique Ken will receive a free 16×20 matted print courtesy of the folks at Aspen Creek Photo. If you’d like your images considered for future critiques, just upload them to the Flickr group I created for this purpose. If you’re not a Flickr member yet, joining is free and easy. You’ll have to read and accept the rules for the group before adding images, and please, no more than five photos per person per week. I’ll be posting the next critique in about two weeks. Thanks for participating!