This week’s photograph was made by Grant Kaye at Badwater in Death Valley National Park, California. The water in this place may be bad to drink, but it’s good for photography. It’s always interesting to see water in the desert, and this spot often has great reflections, especially with clouds at sunrise or sunset, like the ones Grant captured in this image. It’s easy to see why Badwater attracts lenses.

With reflection images, horizon placement is a key decision. It’s usually better to avoid putting the horizon across the middle of the frame, as this cuts the photograph in half, and often creates the feeling of two different photographs stuck together. (I pointed out this problem in another recent critique.)

In this photograph Grant chose put the horizon above center and highlight the foreground and the reflection. I often like this approach, as reflections have richer color than the real objects they’re reflecting. Here this arrangement also accentuates the converging lines of the clouds—they all seem to point to a spot behind the peaks in the center of the image. Overall the composition is simple and direct, with a strong radiating design.

But pointing the camera down also introduced some distractions: the mud and what look like two small white feathers, or maybe pieces of foam. The mud isn’t particularly attractive, and I think this image would have been cleaner without it. Perhaps Grant wanted to create a sense of depth, but without the foreground the mountains would look like they’re floating in a sea of clouds, which I think would be a great effect. Plus the mud obscures some of the reflections, lessening the power of those converging lines.

Of course there are always practical issues to deal with. Grant said that he kept sinking into the mud as he tried to set up his camera. He could have eliminated the mud from the frame by stepping forward, but no doubt this would have required getting very wet and muddy, and risking salt water damage to his tripod.

Given that limitation, I think it would have been better to point the camera up. It would have been easy to put the bottom of the frame just above the mud, and include more of that spectacular sky. The converging lines would still be there—just in the sky instead of its reflection.

Another option was to create a panorama. I’ve cropped this photograph to show what this would have looked like. The centered horizon makes this very symmetrical, but emphasizes the arrow-like shapes of the mountains. Of course if you intend to create a panorama it’s better to capture two or more frames in the field and stitch them together in software. A severe crop like this throws away a lot of valuable pixels, and lowers the resolution of the final image.

I prefer the first of these two options—pointing the camera up and including more sky—but I think the panorama works also.

Grant was fortunate to find great sunset clouds. He used a Singh Ray Daryl Benson three-stop reverse graduated neutral-density filter to help balance the exposure for the bright sky and its darker reflection.

Grant told me, “One thing I dislike about this image is that I feel like the filter artificially imparts a pink hue to white clouds. I’m a new user of this filter over the past year or so, and I’m slowly realizing that it has that effect, which for the most part seems to be undesirable to me.”

I wondered about that when I first looked at this photograph. The color of the clouds seems strange and unnatural, especially since the reflection doesn’t have that pink hue.

I also think this is too strong a filter. In real life reflections are never lighter than the real objects they reflect. But here the water is considerably lighter than the sky. I think a one- or two-stop graduated filter would have been a better choice, producing a more natural balance between clouds and their reflections.

With film, graduated filters earned a place in my camera bag because they help in situations just like this: balancing the sky with its reflection. But now I prefer to perform these balancing acts in software. (Here’s a link to my article on Digital Graduated Filters.)

One reason for this change in my workflow is that it’s difficult to decide which filter to use in the field: one stop, two, or three? Soft edge or hard? Not to mention the expense of buying those six different filters. And then there’s the difficulty of actually seeing and adjusting the graduated part of the filter in the field. Balancing sky and reflections in software also affords more control: I can lighten the water just enough bring out it’s color, but keep it dark enough to appear natural.

Many people still prefer to use graduated filters in the field, as this leaves less work to do later. That’s fine with me—whatever works. But be aware that using too strong a filter can make the foreground or reflection unnaturally bright.

I took this image into Lightroom and used its Graduated Filter tool to actually darken the water. I also lightened the sky and tried to reduce some of the pink cast in the clouds. The result isn’t perfect, but to me looks more realistic, and has better color in the reflections. 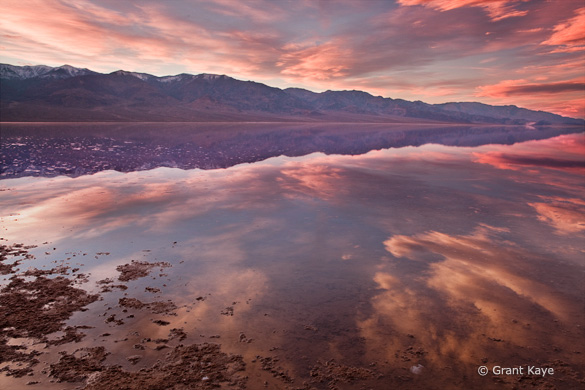 I used Lightroom’s Graduated Filter tool to darken the foreground and reduce the pink cast in the clouds.

Grant used a Canon 5D Mark II camera and 24-70mm lens, with an exposure of 1.5 seconds at f/11, 100 ISO. Aside from the filter issues, the exposure looks good overall. Everything appears to be sharp at these small viewing sizes, but there’s considerable depth in this photograph, and f/11 might not have been a small enough aperture to keep everything truly sharp in a big print. F/16 would have retained more depth of field, and might have been a better choice.

This is a beautiful sunset, with a simple, strong composition. I love the arrow-like shapes of the mountains and their reflections, and the converging, radiating lines of the clouds. I would have tried to eliminate the mud in the foreground, and used a weaker graduated filter, or the software equivalent.

I’d love to hear your thoughts about this photograph. How do you feel about the foreground, and my suggestions for either a panoramic composition or including more sky? Did the color or bright reflections strike you as unnatural? Do you use graduated filters, the software equivalent, neither, or both?

Thanks Grant for sharing your image! Be sure to check out Grant’s work on Flickr and on his web site—he’s made some really outstanding photographs. Here’s one of my favorites. Also, Grant made a beautiful time-lapse video of this Badwater sunset.