This week’s photograph was made by Chris Alexander in Glacier National Park, Montana. That’s the second time recently that I’ve critiqued a photo from this park. Obviously—and no surprise to anyone who’s been there—a beautiful place!

This composition works very well. The bottom two-thirds of the photograph has sweeping, repeating, U-shaped curves that help tie everything together and frame the background peaks. The lake and mountains provide focal points: my eyes work in a triangle around the frame, going from the lake to the prominent peak on the right, over to the peaks on the left, then back to the lake, sometimes detouring around the lower basin to look at the snow patches and trail. The overall design is simple and strong.

If I could quibble with something, it would be the bright spots along the edges that tend to draw my eyes out of the frame, including the snow patch in the lower-left corner, another snow patch near the upper-right corner, and of course the sky.

It would have been easy to zoom out slightly to include all of that snow patch in the upper-right corner. The lower-left part of the frame is more problematic. It’s likely that no matter where Chris placed the bottom and left borders of the photograph, snow would have touched an edge somewhere. As it is, I like the small, dark, snow-free triangle in the corner—that shape helps turn the adjacent snow patch into a diagonal line, echoing the many other diagonals in the photograph. Perhaps the best solution is to just darken that snow patch a bit so it isn’t quite so prominent.

The sky is another issue…

Chris encountered a common problem, familiar to any landscape photographer: how do you deal with an overcast day? Cloudy skies present two main problems. First, the flat, even lighting tends to make the landscape look dull. Photographs need contrast. If the light won’t provide it, then the subject must. Soft light is usually ideal for colorful subjects, where you can emphasize contrast between different hues. Sometimes, however, a not-so-colorful subject has enough light-and-dark contrast to work in soft light. This is one of those cases: there’s not much color, but we see enough difference in luminance between the white snow and the dark pines to give the image life.

The other main problem with overcast days is the sky itself. If you expose the landscape properly, the much-brighter sky looks washed out, as it does here. And because it’s light, the sky draws the eyes—right to one of the least interesting parts of the scene.

The easiest solution is to simply leave the sky out of the frame. Overcast days are perfect for small- and medium-sized subjects, but not typically good for capturing grand landscapes. 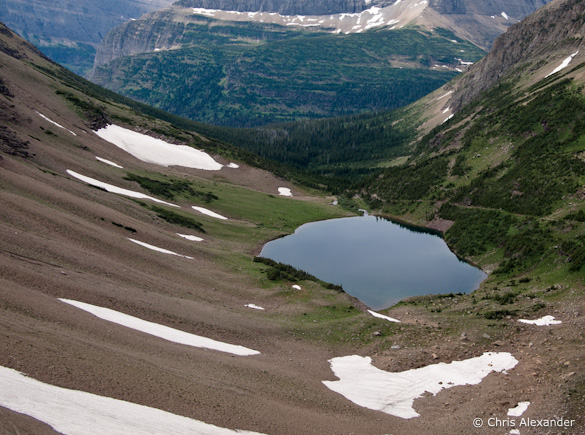 An attempt to crop out the sky

With that in mind I tried cropping the sky out of this image, and here’s one attempt. This has its merits, but I miss those peaks, and that U-shaded foreground design, which complements the background so well, doesn’t seem as compelling by itself. Perhaps there were other angles and sky-free compositions that would have worked better, but that’s hard to say without being there and exploring those possibilities.

If you must include the sky, it helps to either darken it, lighten the foreground, or both. You can do this with either a graduated neutral-density filter in the field, or later in software. With software, sometimes simple dodging and burning is enough, but other times more elaborate methods—Photoshop layer masking, HDR, or other exposure-blending software—are needed to combine two or more different exposures.

Working with a JPEG here my options were somewhat limited, but I’ve tried to show what an exposure blend might look like. First I made a Virtual Copy of this image in Lightroom and used the Exposure and Recovery tools to darken the image and bring out more texture and detail in the sky. Next I merged this darker version with the original using my favorite exposure-blending software, a donation-ware plugin called LR/Enfuse. Finally I used Lightroom’s Adjustment Brush to lighten most of the landscape, and added a slight S-curve to increase overall contrast. 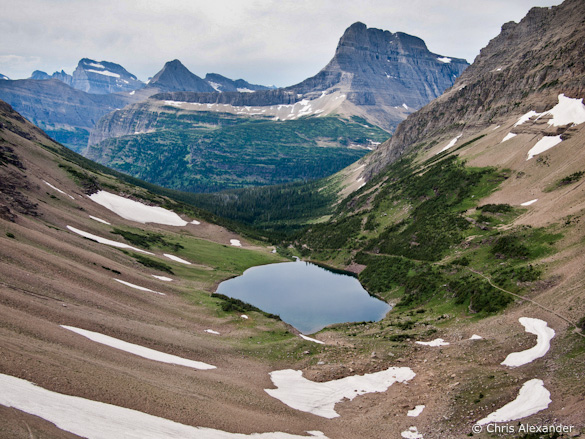 To me this looks better. There’s more texture in the clouds, better balance between foreground and background, and the image seems more dynamic. I’m sure if Chris went back to the original Raw file he could do an even better job. However, there are always limits. Darkening an overcast sky too much makes it look brooding and ominous—probably not the mood Chris was hoping for.

So there are no easy answers for dealing with overcast days. The best solution is usually, as I said, to look for compositions that don’t include any sky. If you want to try capture a grand landscape anyway, either use a graduated filter or bracket exposures to give yourself the option of blending them together later in software.

And by the way, Chris said that he made this photograph at the end of a seven-day backpack trip, so he wasn’t carrying a tripod. But it’s still possible to bracket exposures and blend them, even when handholding, as there are many ways of aligning the frames in software.

The image appears to be sharp, and the white balance seems about right. The overall exposure looks good, but as I mentioned earlier, parts of  the sky are washed out. Since this was captured in Raw mode it’s likely that detail could be recovered in the clouds. Either dodging and burning or the double-processing method I described earlier could help balance the contrast between the landscape and sky.

While the bright sky is problematic, I can’t blame Chris for wanting to show a broad view, overcast skies or not, as it’s a beautiful scene. The composition is excellent, and the image conveys the feeling of this alpine place well. It’s certainly a great memento of the backpacking trip!

I’d love to hear your thoughts about this photograph. What do you think of the overall design? Did the sky bother you initially, only after I mentioned it, or not even then? Do you think my double-processing, making the sky darker and foreground lighter, improved the image?

Thanks Chris for sharing your image! You can see more of his work on Flickr, and on his web site.

Note: I’ll be teaching my Photoshop and Digital Printing workshop Saturday through Thursday, so you won’t be seeing as many posts and comments from me during the next week, but I’ll be back in full swing after that.

As part of being chosen for this week’s critique Chris will receive a free 16×20 matted print courtesy of the folks at Aspen Creek Photo. If you’d like your images considered for future critiques, just upload them to the Flickr group I created for this purpose. If you’re not a Flickr member yet, joining is free and easy. You’ll have to read and accept the rules for the group before adding images, and please, no more than five photos per person per week. I’ll be posting the next critique in about two weeks. Thanks for participating!