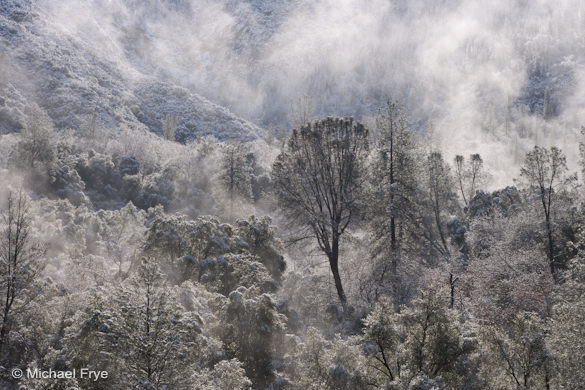 5. Gray pines after a snowstorm

Jim Goldstein posted his Best Photos of 2010 Blog Project today, with the top images of 2010 from 162 photographers, including me of course. It’s worth spending some time looking through these photographs, as there’s a lot of great work.

For me, picking out my best photos from last year was a difficult, fascinating, but ultimately rewarding process.

First I had to go through more than 8,000 images from last year to make sure I hadn’t overlooked any gems. The biggest find was #11, Redbud Reflection II, which in your votes tied for second place. I had set this photograph aside, as it didn’t seem to have the brilliance of another similar image I made in 2003. Only after adding a sharp S-curve to increase the contrast did it really come to life.

After narrowing the selection down to 46 things got really interesting when I invited you, the viewers, to vote for your favorites. The most surprising image was probably number 5, Gray Pines After a Snowstorm. This was another photograph that I rediscovered recently when putting together my submission for the Yosemite Renaissance competition. I liked it, but assumed it would be too quiet to get much attention, so it was gratifying to see it get the seventh-highest number of votes.

Inevitably, of course, some of my favorites didn’t get many votes. I think number 46, Aspen Forest, Dunderberg, is one of my best high-key images, but I realize that these photographs are a bit out of the mainstream, plus they look much better as prints, and this one, in particular, needs to be seen larger.

On the other hand, I wasn’t surprised that number 3, Winter Sunrise From Tunnel View, got the most votes, but nevertheless it was gratifying to see that so many people liked it, as it’s one of my favorites too. I’ve stood at Tunnel View many, many times, waiting and shivering, hoping for the sun to break through storm clouds. This is probably my favorite image from this spot so far, one that captures some of that moody drama that epitomizes winter in Yosemite Valley.

But it would be easy for my valuation of this photograph to be colored by so many past disappointments. When you think you’ve finally succeeded at something you tend to overestimate the end result. As Dan Mitchell wrote recently, “The photographer is usually the person least able to form an objective opinion about his or her own work.” Often we find that others don’t respond to our favorites because the time, effort, and imagination that went into making them—invisible to the viewer—taint our objectivity.

Listening to Others, But Staying True to Yourself

Because it’s inherently difficult to be objective about your own images, it’s always valuable to get other people’s viewpoints about your photography. This feedback can help you become a better editor of your own work, and a better communicator with your photographs.

But while other’s opinions can be helpful, it’s fatal, creatively, to be thinking about what people might think before pressing the shutter. If you see a composition that appeals to you, but then your inner censor says, “I don’t think other people would like that,” or, “It won’t sell,” you’ll stifle your true creative impulses and your unique vision.

Ultimately you’d like to make photographs that are true to yourself, that convey your ideas or feelings, yet do so in a language that others understand. As a photographer, as an artist, you need to listen to that inner voice that says, “This is good, this works, even if no one else understands it.” But you also need to allow viewer’s reactions to guide you and help you communicate that vision better. Part of the fun of photography is sharing your work, and it’s satisfying when other people actually get what you’re saying.

I’m curious to hear about your experiences with this aspect of photography. Do some of your favorite images draw only polite smiles when you show them to others? Do you ever think about viewer’s potential reactions before you press the shutter? Where, or from whom, do you get the most useful feedback about your photographs?

Thanks again to all of you who chimed in and voted—you made this whole process really fun!