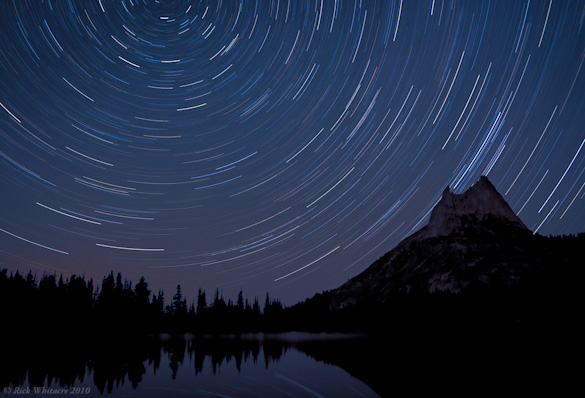 This week’s photograph was made by Rick Whitacre at Upper Cathedral Lake in Yosemite. By having his image chosen for this critique Rick will receive a free 16×20 matted print from Aspen Creek Photo. If you’d like your images considered for future critiques you can upload them to the Flickr group I created for this purpose.

When I saw this image among the submissions for this series, it occurred to me that I hadn’t critiqued a nighttime photograph before, and that doing so might help provide some lessons and insights into night photography.

Night photography often takes some planning. During the day you can wander around looking for good subjects, or interesting light, and simply go where your eye and imagination lead you. Nighttime images often need specific configurations of celestial objects, like the stars or the moon.

I’ve used many different astronomy applications to help predict these alignments, but my current favorite is The Photographer’s Ephemeris. This program not only tells you the angle of the sun or moon at a given date and time, but integrates with maps to allow you to determine exactly when sunlight will strike a certain peak in the morning, or when the moon will crest a ridge from a certain vantage point. In short, this is a great program! The desktop version is a free download (although I recommend making a donation to support the development of this tool), and there’s also an $8.99 iPhone app.

This photograph needed some planning to position the star trails. Since Polaris is directly above the north pole, it doesn’t move as the earth rotates, but other stars do, and with long exposures these form circular star trails around the north star. Rick wanted to capture these circles above a landmark, and used The Photographer’s Ephemeris, along with advice from a friend, to find this angle on Cathedral Peak.

To me the best thing about this image is the way the curving lines of the star trails mimic the shape of the peak and horizon—that’s very cool. The star trail reflections in the water are an added bonus. The overall composition is clean and strong, with great lines and repetition. Combined with the dark blue, purple, and white color palette the photograph conveys a peaceful, even majestic, nighttime mood.

In his description on Flickr, Rick says, “No doubt about it, I gotta get me a wider lens. Or a full-frame sensor. Or both……” He wanted to get both the north star and some of the reflections in the same frame, but his widest lens, 17mm on an APS-size sensor (Canon 50D), couldn’t quite fit that in. So he decided to leave Polaris just out of the frame and include a little bit of the reflections.

Well I echo those sentiments about a wider lens! That would definitely have helped here. I’d love to see circles around the North Star and more of those reflections. But given the equipment he had, is there something he could have done differently? Maybe. Given the choices, I’d opt for pointing the camera down and getting more reflections. To me it’s that water and the reflections of the star trails that sets this image apart and makes it different from most other star-trail photographs. So if forced to choose, I’d like to see more water and less sky. It would also help to have a little more breathing room below the reflections of the trees in the lower-left corner.

Another possibility was to change the camera to a vertical orientation. From the same vantage point this would have put the North Star and Cathedral Peak too close to the edges of the frame, but if Rick could have walked to the right along the shore he might have been able to “move” Polaris closer to the mountain. With my limited knowledge of this area I think this might have been possible, but I can’t be sure. Even from the same camera position it might have been interesting to try a vertical orientation without the North Star in the frame.

Technically this image is well-executed, and the processing is excellent. Rick did some research and followed the techniques in this article by Alister Benn describing the image-stacking technique that has become popular for recording star trails with digital cameras. The idea is to reduce noise and avoid washed-out skies by blending together a series of shorter exposures, rather than making one long exposure. Another good source for information about this technique is Lance Keimig and Scott Martin’s book Night Photography: Finding Your Way in the Dark. Rick made six ten-minute exposures at f/4 and 200 ISO, then blended these frames together in Photoshop.

Although it took a lot of work—he had to remove “dozens of airplane tracks”—the end result looks seamless and natural. He also lowered the color temperature in processing to cool the image and enhance the blues, which I think was a good choice for this image.

Overall this is very well done. It took imagination, planning, good technique, and shivering through cold nighttime temperatures to create an image with a great nighttime mood.

Thanks Rick for sharing your image! You can see more of his work on Flickr.

As part of being chosen for this week’s critique Rick. will receive a free 16×20 matted print courtesy of the folks at Aspen Creek Photo. If you’d like your images considered for future critiques, just upload them to the Flickr group I created for this purpose. If you’re not a Flickr member yet, joining is free and easy. You’ll have to read and accept the rules for the group before adding images, and please, no more than five photos per person per week. I’ll be posting the next critique in two weeks. Thanks for participating!