A Rift in the Clouds 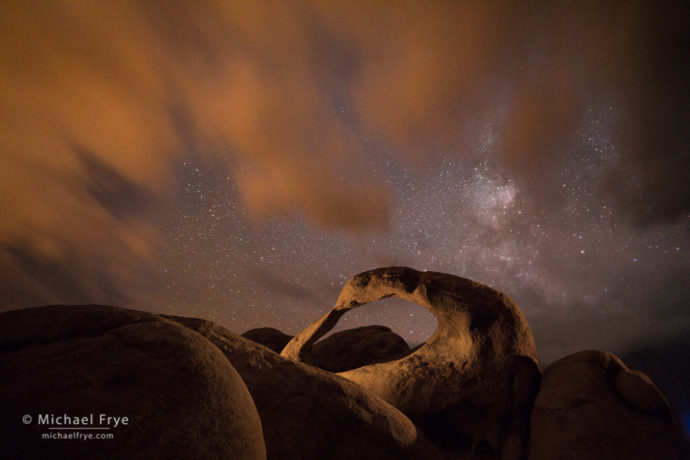 We just finished a nighttime workshop in the Trona Pinnacles and Alabama Hills. The forecast for our last evening wasn’t promising, calling for mostly cloudy skies and a 70 percent chance of showers. But I told the group that as long as it wasn’t raining there was still a lot we could do, and if we got just a few small breaks in the cloud cover the mix of stars and clouds could be really beautiful.

As sunset approached we headed out to the famous Mobius Arch in the Alabama Hills. We photographed some interesting cloud formations in late-afternoon light, then at dusk set up our cameras to frame the arch with the sky above. The skies were mostly cloudy, just as predicted. Radar images showed showed heavy rain falling west of the Sierra crest. But from our position in the Alabama Hills, in the rain shadow created by the mountain wall, a patch of sky to our west-soutwest stayed partially clear, and remained that way most of the evening. Something about the trajectory of the wind and rain created that rift in the clouds and kept it in place.

From our vantage point that rift was conveniently positioned behind and above the arch. We captured frames as the sky turned deep blue and stars began to appear. When it got completely dark portions of the Milky Way appeared, and the underside of the clouds turned orange, lit by the faint glow from nearby Lone Pine. We couldn’t really see all this, but the backs of our cameras revealed an astonishingly beautiful scene.

We photographed this constantly-changing view for quite awhile, but eventually the clouds got thicker, and we decided to add some light-painting frames. One of our participants, Louie, volunteered to do the lighting while someone else tripped his shutter, and the rest of us directed the lighting. We tried a variety of lighting angles, but I ended up using only two of these: one from the left, raking across the front of the arch, and another from behind and to the right, adding a rim light to the right side of the arch and the foreground boulders. So the final image you see here is a blend of three frames – one for the sky, and two for the light-painting. And since I know you’ll ask, the exposure for the sky was 30 seconds at f/4, 6400 ISO. (We used 15 seconds, f/5.6, and 400 ISO for the light-painting frames, but those settings can vary greatly depending on the brightness of the light and the distance from the light to the subject.)

Light-painting is more art than science; there’s no formula, because every subject and situation is different. I’d like to find lighting angles that accentuate and enhance the unique form and character of the subject. Sometimes this is a lot easier said than done, but I was pleased with out how the lighting turned out here (thanks to Louie for his excellent work!).

And we got lucky with the sky and that perfectly-positioned break in the clouds. When photographing at night I’m usually happy to just have clear skies, but sometimes a mix of clouds and stars is even better. Serendipity has been a friend to many photographers, and it graced us that night.