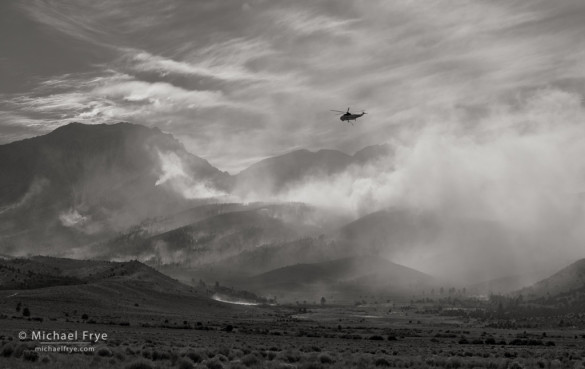 Helicopter over the Walker Fire from Highway 395, last Sunday evening

Our Starry Skies Adventure workshop turned out to be a little more adventurous than we thought. Just before we left our home in Mariposa last Saturday to head for the workshop I checked the satellite photos online. The Rough Fire near King’s Canyon National Park had been sending smoke north, so I was keeping an eye on it. But my last-minute check revealed a new smoke plume just to the southwest of Mono Lake. Uh oh. Our workshop was based in Lee Vining, on the west shore of Mono Lake, only a few miles from that smoke plume.

I could see the smoke from this new fire on one of the Yosemite webcams. I found that it was called the Walker Fire, and that it had started the night before near Walker Lake, but I couldn’t find any up-to-date information about the fire’s size and location. When Claudia and I left home about 3:00 p.m. the Tioga Road (Highway 120) through the park was still open. But when we got to Tuolumne Meadows we found that the fire had closed the road between the eastern entrance of the park and Highway 395. What do we do now? We decided we had to drive around over Sonora Pass and check out the fire in person. That meant five extra hours of driving, and a long night ahead of us.

END_OF_DOCUMENT_TOKEN_TO_BE_REPLACED

Back From the High Country 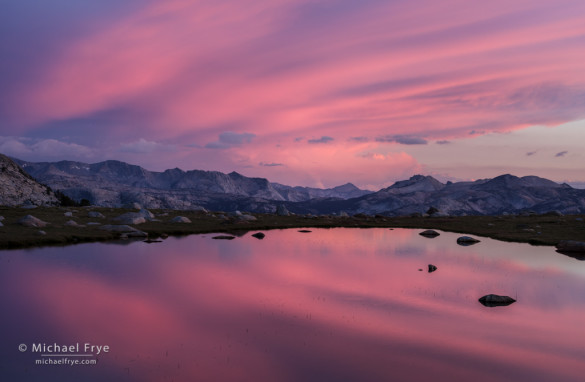 Sunset clouds reflected in an alpine tarn, Saturday evening. This was a spectacular sunset that seemed to last forever. Believe it or not I actually toned down the pink color – it was pretty intense.

My Hidden Yosemite workshop with The Ansel Adams Gallery ended Sunday evening, and since then I’ve been catching up on work – and sleep! The days are long this time of year, which meant early starts and late evenings during the workshop, but it was all worth it, and we had a wonderful time.

END_OF_DOCUMENT_TOKEN_TO_BE_REPLACED

Back From the Redwoods 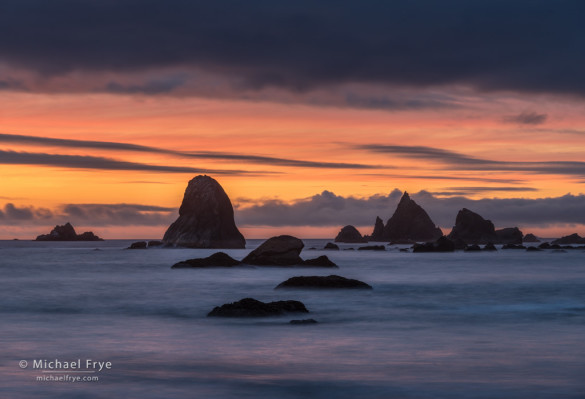 We had a wonderful time last week during our redwoods workshop. It was a really nice, fun group, with great camaraderie and lots of laughter, aided and abetted by the relaxed atmosphere at the fabulous Requa Inn. We got some fog, which is always a great complement to the forest scenes, and were also treated to a couple of beautiful sunsets along the coast.

END_OF_DOCUMENT_TOKEN_TO_BE_REPLACED 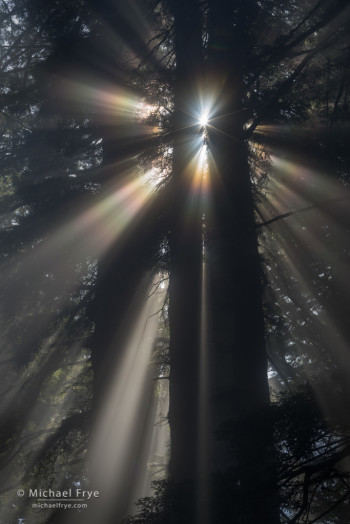 Sunbeams and corona in a redwood forest, northern California, USA

Claudia and I have been up in the redwood country, in far northern California, for the past two weeks. We had such a great time during my Mystic Forest workshop. Like last year, we stayed at the Requa Inn, with its great food, relaxing atmosphere, and beautiful views. We had a wonderful group of people, and I already miss the energy of the group learning and photographing together. And we had great weather, with lots of fog! Here’s one image from our first morning, with the sun breaking through the fog and creating a spectacular triple corona. I’ll post more photographs soon as I get time to process them.

Related Posts: In Redwood Country; Back From the Redwoods, and the Lightroom 5 Release 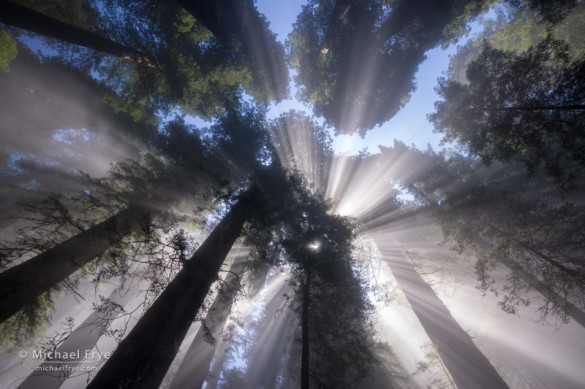 Weather always plays a big role in landscape photography. I study the weather so that I can put myself – and my workshop students – in the right place at the right time. But a little luck always helps.

During my recent workshops up in the redwood country we found some wonderful juxtapositions of fog and sunlight. One morning, during the second week, we pulled up to a trailhead and everyone immediately got out their cameras because we saw beautiful godbeams right from the parking area. But, as it turns out, we didn’t need to rush. Usually these sun-breaking-through fog moments are fleeting, but it turns out that we were right at the top of a relatively stable fog bank, so the mixture of sun and fog lasted for hours along parts of the trail. The photograph above is just one of many sunbeam photographs I made that morning, and everyone in the group came away with some great images from that day.

END_OF_DOCUMENT_TOKEN_TO_BE_REPLACED 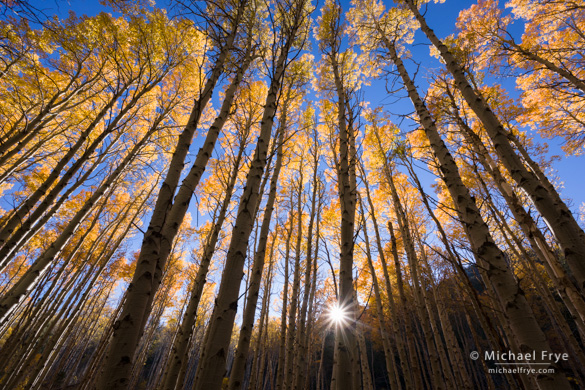 If you’re not subscribed to my email list you missed the announcement of my Eastern Sierra Fall Color: Composition and Creativity Among the Aspens workshop next fall. We had such a great response to this offering that it sold out the first day! But the good news is that we decided to run a second edition of this course from October 20-23, 2013, and there are still a few spots available.

I made the accompanying photograph during the first edition of this workshop last October. We photographed this aspen grove late in the afternoon as the lowering sun backlit the yellow leaves. This was my favorite image from that spot, but I saw many interesting, unusual compositions by everyone else that afternoon, both on the back of people’s cameras and later during image reviews. You can see some of the participant’s photographs in this Flickr group.