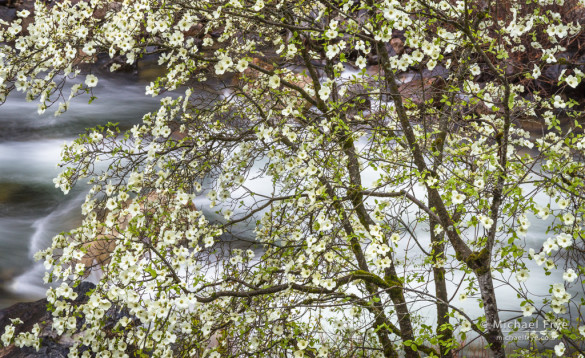 I’ve been helping my mom recover from eye surgery and move into assisted living, so life has been hectic, and I haven’t had much time for photography. But yesterday a rare and much-needed storm came through, and there were signs of clearing in the afternoon, so I took the time to go up to Yosemite Valley.

It didn’t clear after all. In fact it rained most of the time I was there, with the rain turning to snow in heavier showers. But rumors of dogwoods blooming turned out to be true. I found one particularly full dogwood along the Merced River, and was able to photograph it during a break between rain squalls (above).

Most of the dogwood blossoms in the west end of the valley around Pohono Bridge, Fern Spring, and Valley View were still in that green stage, but there were a few trees in full bloom, with white blossoms. I didn’t make it to the eastern end of the valley, so it’s possible that some dogwoods there are further along, especially in sunnier areas like near the Ahwahnee Hotel. This dogwood bloom is about two to three weeks earlier than usual. But, like the redbuds, which also bloomed early this year, the dogwoods seem to be progressing slowly, so they may last awhile.

As I mentioned, Yosemite Valley did get a little bit of snow off and on yesterday, all of which melted quickly. But temperatures dropped a bit as the tail end of the storm passed through after sunset, so perhaps there was some accumulation overnight. We’ll see soon!