A Rainy, Misty Day in Yosemite Valley, and a Quick Fall Color Report 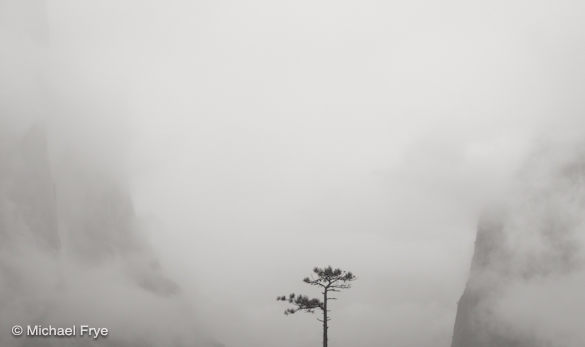 It rained in Yosemite Valley on Monday afternoon, but my private workshop student Dale and I didn’t mind too much. While we got a little wet, the rain generated beautiful, ethereal scenes perfect for black-and-white photography. To me the mood was reminiscent of those Chinese paintings with misty hills and trees, so I looked for compositions that could emphasize that feeling. Here are a couple of my favorites.

You’ve probably heard that bad weather can be great for photography, and there’s certainly some truth to that. For me, having photographed Yosemite Valley so many times, I think any unusual conditions fire my imagination. 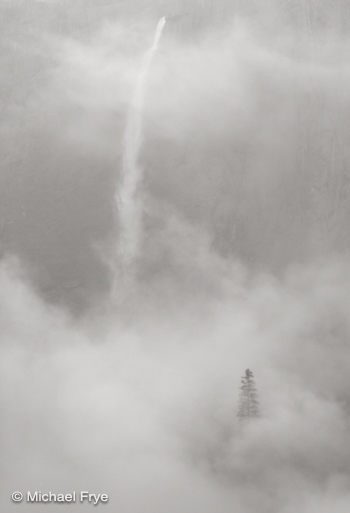 While photographing at Tunnel View we were treated to a striking sight: a young woman in a skimpy, strapless, red-and-white dress, with gold high-heeled shoes, posing for a photographs with a man in a white shirt and tie. I assume they’d just been married…

Anyway, I quickly changed lenses and snapped a couple of photos of this scene—you can see one at the end of this post. Note what the other woman in the photograph is wearing, and the umbrella; it was about 50 degrees and raining lightly. Also, check out the shoebox on the ground, accompanied by a pair of worn sneakers. The woman in the red-and-white dress walked out in those sneakers, changed into the gold stilettos for the photos, and then, as soon as they were done posing, put the stilettos back in the box and stepped into the sneakers.

I started thinking about the lengths that this couple went just to get a few photos… and then realized that Dale and I were standing out there in the rain just to get a few photos… Sure, we were dressed more appropriately for the conditions, but we were also out there a lot longer! So we weren’t that different after all. I think we all have the ability to ignore discomfort for the sake of a photograph.

Meanwhile, there was very little autumn color to be seen in the valley. A few leaves here and there have begun changing, but that’s it. This is not terribly surprising, as I usually expect to see the peak color in late October or early November, but autumn is definitely late in Yosemite. I haven’t heard any reports of fantastic color over on the eastern side of the Sierra either; the aspens there seem to be late as well. We’ll be heading over to Lee Vining next week, so I’ll be able to give you a first-hand report. And if you’ve been out photographing fall color, please let us know what you’ve found in the comments!

On another note, I just finished writing a new eBook (more about that later…), and have had a busy workshop schedule, so I haven’t been able to do a critique in awhile, but I’ll try to post another one soon. Thanks for your patience!

Dressed for the weather